The move was recently announced by the operator of the expressway, Vietnam Infrastructure Development and Finance Investment Joint Stock Company (VIDIFI). 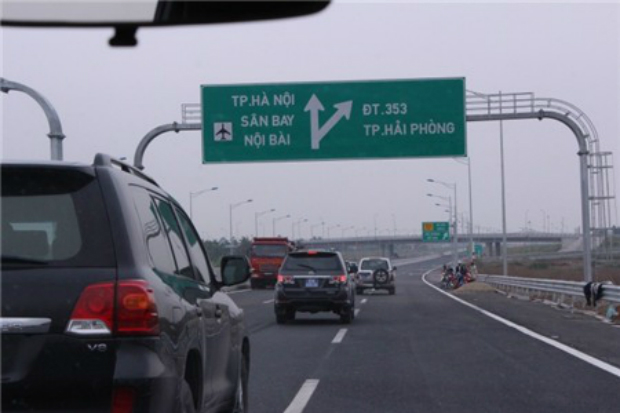 FDI enterprises and foreign companies in industrial parks along National Highway No.5 use the Hanoi – Hai Phong route as a critical path to Dinh Vu Port, and the increased fee could have an impact on container movements through the corridor.

Current data shows that about 20,000 vehicles use the expressway each day, which is a driving force for development in the Red River Delta.

The Hanoi- Hai Phong Expressway is an international standard six lane highway allowing a maximum speed of 120km per hour, but VIDIFI chairman Dao Van Chien admitted that Vietnam’s most modern highway is not used by many logistics firms due to the high tolls, which are two times higher than on National Highway No.5.

Only 200 container trucks are using the Hanoi-Hai Phong Expressway per day, just 10 percent of those that travel via National Highway No.5.

“Overloaded trucks and containers are not allowed to use the Hanoi – Hai Phong Expressway as they could destroy the road surface, and drivers want to avoid being fined at weighing stations at each toll point,” he added.

Chairman of the Hai Phong Road Freight Transportation Association, Le Nhu Tien, said that in the short term, transport firms will have to raise shipping fees, but it could lead to huge losses if customers are unwilling to take on the additional cost. In his assessment, the tolls applied on the expressway are unreasonably high compared to other national highways.

“We need to recalculate and reduce expenditure to compensate, and we will probably lower the number of buses we operate if the situation gets worse,” said a representative from the Hai Phong Bus Company.

“A large number of transport firms and people have no choice but to use the expressway,” said Bui Danh Lien, chairman of the Hanoi Transportation Association, adding that high spending could put pressure on the economy and social activities.

Khuc Huu Thanh Hai, director of Dat Cang Company, which operates 40 buses that use the expressway, said that his firm only makes a profit when its buses are 70 percent full, and that normally only happen at weekends.

“The situation is difficult and could get worse if fees continue to rise in the coming months,” said Hai.

VIDIFI’s Chien said he understood the difficulties facing transport operators, but that the fee hike was needed to repair and maintain parts of the expressway to the tune of VND300 billion (over $13 million), of which VND20 billion will be provided from the Directorate for Roads of Vietnam.

According to VIDIFI, it will take at least 30 years to retrieve its investment in the expressway, and the rise was needed to meet this target.

The 105km-long Hanoi – Hai Phong Expressway connects Hanoi, Hung Yen, Hai Duong and Hai Phong, and cost VND45 trillion to construct. The expressway opened in December 2015 and has reduced the travel time from Hanoi to Hai Phong from two and a half hours to as little as one hour.