Thailand has poured $7.88 billion into 428 projects in Vietnam, according to data released by the Foreign Investment Agency on March 7.

Thailand has increased its investment capital in Vietnam by 32.2 percent from $5.9 billion recorded in 2012 to $7.88 billion in February 2016, ranking 11 on the list of Vietnam’s top investors. 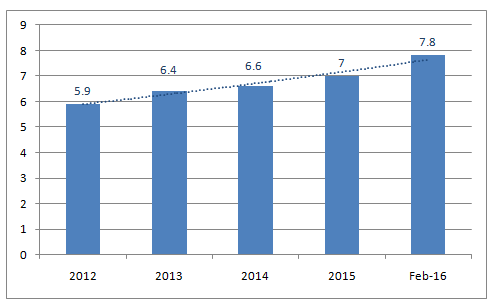 Vietnamese economists said that Thailand has increased its flow of capital into Vietnam due to the country’s stable growth, large population and strategic location that allows it to access other potential markets such as Laos, Cambodia and China.

The average size of every Thai project is about $18.4 million, said the agency.

Thailand’s investment mainly focuses on the processing and manufacturing industries, with 200 projects worth nearly $7 billion accounting for 88 percent of the total capital. Other areas include agriculture, forestries and fisheries with 31 projects worth $235 million.

Ho Chi Minh City has the largest number of investment projects from Thailand with 162 projects.

In terms of project value, Vung Tau province, located on the coast of the country’s southeast region, was the leading attraction with 48 percent of investment capital from Thailand, equal to 3.77 billion.

In July 2015, Vietnam and Thailand also set a target to reach $20 billion in bilateral trade turnover by 2020.