Shares of Viet Tien Garment Co. sold like hot cakes during its debut on Thursday on the back of the opportunitues afforded by trade pacts Vietnam has reached with various foreign partners.

Viet Tien Garment Co., one of the leading garment firms in Vietnam, saw its shares rise to their ceiling price during its first trading session on the local market for unlisted public firms (UPCoM).

As of 11 a.m., millions VGG shares were going for VND56,000 per share, VND16,000, or 40 percent, higher than the reference price. By the end of the session, total trading volume of VGG shares reached 9,000 units, according to the Hanoi-based UPCoM. 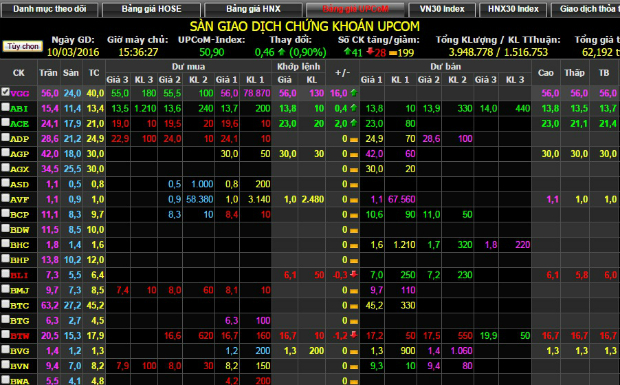 With a VND1.12 trillion ($50.4 million) market value, Viet Tien, one of the biggest of its kind in Vietnam, also became the biggest garment firm on the UPCoM after floating 28 million shares.

The firm’s target dividend payment for this year has been capped at 20 percent, given its downward adjustment in revenue and profit, at VND6.3 trillion (-1.56 percent) and VND200 billion (-39.58 percent).

Regarding business prospects, the Hanoi Stock Exchange (HNX), where the UpCom is placed, said Viet Tien operates mainly in garments and textiles, the country’s main export products, of which exports increased at an annual rate of 21.6 percent from 2010-2014.

Following Vietnam’s signing of the Trans-Pacific Partnership (TPP) free trade agreement (FTA) with eleven Pacific Rim economies, and the Vietnam – EU FTA in 2015, the garment and textile industry is expected to have a lot of development opportunities, especially once import tariffs are eliminated completely to TPP members.

However, the TPP also brings challenges given the “yarn forward” rules of origin, a strict requirement for product traceability requiring TPP nations to use TPP member-produced yarn in textiles in order to receive duty-free access, according to the American Chamber of Commerce in Vietnam.

Viet Tien, despite selling goods to 30 countries worldwide with major partners such as the US, Canada, UK, France, Germany, Japan and South Korea, still relies on raw materials imported from China, a non-TPP country.

Regarding ownership structure, the state-run Vietnam Textile and Garment Group (Vinatex) is the biggest stakeholder with about 47.9 percent, followed by the Malaysia-based South Island Garment SDN.BHD (14.16 percent) and the Hong Kong-based Tung Shing Sewing Machine (9.94 percent).

Asian garment manufacturers are concerned about the Vietnam’s disproportionate benefits over regional rivals in the textiles sector as a result of major trade deals, including the new, U.S.-led Trans-Pacific Partnership and the free trade agreement with the European Union, the Nikkei Asian Review reported.